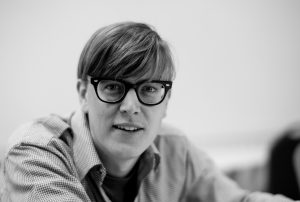 Blogging has evolved perhaps more quickly than any form of writing before it. While The Blog Starter is geared towards helping up and coming bloggers create their blogs and websites to define the future of the internet, I feel it is also important for contemporary bloggers to have a sense of how blogging began as they start their own blogs. To help with this, I set out to get the perspective of a man credited as one of the first personal bloggers on the internet. The following is based on an interview conducted with blogging legend Justin Hall.

Chicago-born Justin Hall is a true original. In 1994, he launched a webpage known as Justin’s Links From The Underground. The page was one of the first personal blogs on the internet and it quickly became focused on sharing details of Hall’s life with his readers, who were primarily his fellow students at Swarthmore College.

At the time, widespread public internet use was still an emerging trend, and it was taking hold much faster on college campuses than in other places. Reflecting on that time, Hall says that “I couldn’t just call my mom and tell her to load up the page…at college, it was easy.”

This access created a unique bubble where Hall could share his life primarily with people in his peer group. This type of soul bearing wasn’t new to Hall though, and from an early age he found value in truth and transparency.

Speaking of his teenage years, he says that “I used to take my journal and hand it to people. The rule was that they could read any page they wanted, but they had to write something as well.”

It is not hard to imagine this as an analog precursor to blogging, with the blogger sharing his life and thoughts with an audience that is free to respond back, similar to a modern day comments section.

Though he is often cited as one of the originators of personal blogging, Hall remains modest. As far as his reasons for starting the page in the first place, he says “I was so enchanted by the notion of personal honesty on the internet.”

This attitude helps explain how he arrived at blogging as a way to express himself, well before it was popularized. Of course, personal blogging is a double edged sword and often puts the blogger in a position to share things with his audience that might be sensitive or personal.

Reflecting on his early years in blogging, Hall says that “There were times where it was clear that I had crossed a personal boundary with someone.” In those cases, he would work to patch things up interpersonally rather than opt to remove content altogether.

When I ask him about the role of personal blogging today, when so many facts are up for dispute, Hall remarks that “Now it is tough to know what a true personal voice on the internet is anymore.” With so many bloggers purposefully obscuring their motives, he certainly has a point. Not too mention the commercial element of many modern-day websites that has lead to the advent of things like advertising networks, website building software, and e-commerce.

Ultimately, he says, “The conversation is crowded.” It is clear from speaking with him that he doesn’t view this an impediment though, but rather an invitation for the next generation of voices to take hold on the internet.

Though he helped set the stage for blogging in the form that we know it today, Hall is excited to see where it goes and how blogging continues to evolve.

Steps for building your blog